Did You Let The Pitbull Loose?

Loving or Furious – Insurance Carriers can’t be expected to know the circumstances! 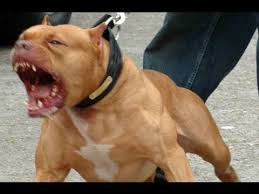 Some homeowners make the adult decision to have a dog;  some insurance carriers make the business decision to underwrite risk!   Each has to think about the consequences.

Those homeowners who decide to have an attack dog in their home or on their premises,  make the decision based on the protection of their home, family and/or belongings but there is a risk involved.  If someone were to penetrate the safe zone, the dog will most likely attack and cause bodily harm – this is a certain liability for the homeowner and definitely a concern of the underwriting carrier.

On the other hand, there exists a small segment of society who enjoys owning attack dogs, breeding them, training them to fight and bringing them up as vicious animals; we couldn’t imagine an insurance company would knowingly underwrite the liability of such behavior.

Each insurance company has a ‘Forbidden Dog List’,  for the most part, the top five or six breeds are inclusive on all lists; then, of course, we have the verbiage ‘any mix of the above breeds and/or any dogs with prior bite history’.  These lists are generated independently by insurance carriers who have studied prior animal liability claims;  both propensity to attack and the severity of bite are taken into consideration in the process. For example, a Chihuahua is a breed most likely to bite but the attack ranks very low on the severity scale – thus, the Chihuahua is never on the list due to the breed. If on the other hand, the Chihuahua has a prior bite history, that would preclude the animal from inclusion for coverage. The other extreme of the breed would be the Pitbull or Rottweiler, they rank very high on the severity risk; thus, if an attack would occur, it would likely involve bodily injury.

Home Insurance carriers are in the business of ensuring homes;  homeowners insurance policies are package policies which include family liability.  For those who don’t fit into the ‘preferred risk’ category,  there is a sub-standard market providing home insurance which may be much more permissive and rightfully charging an according to rate.  Also, each state has a Fair Plan which is an insurance pool for homes that aren’t able to obtain insurance;  the Fair Plan will write a basic fire policy and perhaps have a few additional coverage options, liability isn’t one of them!

In closing, Insurance Companies have no expertise in animal behavior and/or human psychological factors and can’t be expected to;  underwriting regulations are set across the board and not for one particular dog or particular household.

Previous:Careful with that Chisel! Save $20 for 30% Hit?
Next: On Vacation Without Shutting Off Interior Water Main???